Farmers' Markets: Not just about the food

Over the past 10 years I have, along with many others it seems, become increasingly enthusiastic about farmers’ markets. This enthusiasm stems from a general passion for food, but also in the feeling of community that farmers' markets all over the world seem to provide. In fact, I often go out of my way while travelling to visit the local farmers’ market.

On a recent trip to the United States, I actually re-arranged my travel plans in order to arrive in time to visit their local farmers’ market… and it wasn’t even to purchase groceries as I was staying in a hotel and the conference was fully catered! For me, farmers’ markets have always been only in part about the food.

Over the years, I have been on both sides of the market stand, mostly as a customer, but also as a seller. As a summer job, I briefly worked for a neighbour selling baked goods at farmers’ markets in Ottawa. This allowed me to more closely observe the proceedings of farmers’ markets.

However, amid this enthusiasm, I have also become more careful about what I purchase at the market and why. This has encouraged me to reflect on the nature of farmers’ markets, how they’ve evolved and why it is that we seem to be increasingly drawn to them.

How many farmers’ markets are there in Canada?

As a result of this interest, more markets are ambitiously extending their seasons into the winter, which in Canada, requires some additional infrastructure investment.

All this to say, clearly I am not alone in my fondness for farmers’ markets.

Come for the food, stay for the community

It seems customers are loyal to their local farmers’ markets not only for the promise of fresh food, but also because of the feeling of community they often provide. Food has a unique ability to foster human connection. The atmosphere found in farmers’ markets is usually quite festive, often with live music and smiling vendors. They also often provide a healthy dose of nostalgia, a feeling that is usually missing among chain grocery stores.

Beyond creating community, farmers’ markets have also been praised for stimulating local economies and preserving farmlands that would have been otherwise lost to development. According to a peer-reviewed article examining and comparing farmers’ markets in London, ON and Flint, MI, farmers’ markets were touted as playing a vital role in local economic development. They can do so by providing a sight for local and small business incubation. This can then create a multiplier effect bringing increased business to neighbouring enterprises. This allows customers dollars to be reused more locally than perhaps they would have been otherwise.

All of this can strengthen local economies while increasing access to local, fresh food. Some have even suggested they can help to address issues of food security. However, this begs the question; how physically and financially accessible are these markets?

A question of affordability

Farmers’ markets sometimes carry the assumption that they will be more expensive than the grocery store. And in some cases, this can be true. I can think of a few trendy farmers’ markets I have visited downtown Toronto where I have been quite surprised by the high prices for commonplace fruits and vegetables.

However, according to some research farmers’ markets provide the community with nutritious, affordable food - rather than being “boutique” establishments accessible only by upper middle class residents (as was suggested in this paper).

Here in Guelph, ON a local non-profit organization called the SEED runs a regular, affordable community food market. This market takes place in various neighbourhoods around Guelph and the goal is to increase the accessibility – both physically and financially – of good food for everyone. All items are priced on a sliding scale with the top amount equivalent to retail value and the lower amount as cheap as can be sustainably offered (usually falling around 30-50% below retail prices). Market customers are asked to pay whatever feels right for them. Furthermore, recognizing that markers are not only about the food, the SEED tries to organize activities around the market in order to foster community connectedness. 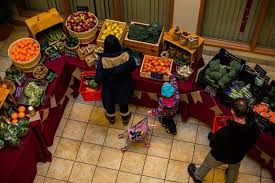 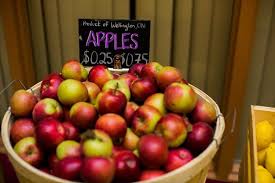 Canada has seen a surge in Agritourism, and part of this success may be attributable to a simultaneous rise in farmers’ markets. Where farmers’ markets have customers and producers meeting half-way, agritourism is where customers are actually invited onto the farm and are able to see first-hand how food is produced.

Many of us have likely participated in some form of agritourism or another, be it picking our own strawberries in June or else cutting down a Christmas tree in the winter. A wine or brewery tour could even be considered a form of agritourism.

Using this as a tool, producers are able to provide customers with education and entertainment while also promoting their business. These experiences can foster a greater understanding of where our food comes from and the many ways it can be used. Additionally, it may be a more feasible way for producers to connect with consumers than farmers’ markets. The time required to organize and set-up for a farmers’ market can be very demanding, especially during peak harvest season, and may provide only slim profit margins. Agritourism helps overcome some of these obstacles.

In most places in Canada, the actual growing season is relatively short. Historically, farmers’ markets have diligently stood beside the seasons, closing their doors during winter. However, more markets now are now open year-round with big investments being made to build semi-permanent or permanent structures.

However, some remain skeptical. What could possibly be available year-round in farmers’ markets that isn’t available in the grocery store? In the midst of January, expect to find fewer fresh produce items and more preserved goods, crafts and baked goods. These farmers’ markets have been referred to as being “hybrid markets” whereby non-farming vendors are also included. In order to dictate what is acceptable, guidelines have been developed around types of goods sold, words to define goods and the geographic restrictions around food.

However, the sense of community commonly found in farmers’ markets fortunately does not change with the seasons and can be found year-round across the country.

In a COVID-19 World, is Local Better?

Farming in the Era of COVID-19