Is online grocery really going to take over?

This article has also been published in the Conversation on November 20th, 2017.

While it may feel that the Canadian market is late to the online grocery game — there are several chains that have been offering it in the United States for years, for example — it’s really a natural evolution reflecting differences in Canada.

Online grocery shopping has received a lot of attention but remains a relatively small proportion of total grocery sales in Canada. Total online grocery expenditure is estimated at approximately $2 billion with growth predicted to climb to almost $4 billion in the next couple of years. The current activity is largely focused in and around Toronto and Vancouver.

That’s tiny given an annual retail food market of almost $100 billion, $80 billion of which is focused on traditional grocery stores.

This begs the question: Are sales in Canada low because demand is low, or because there are not many good options outside of Toronto and Vancouver?

Canadians are much less likely to shop online than Americans. Estimates of online shopping range from 2.5 per cent to 6.5 per cent of total retail sales. By comparison, online purchases are estimated to be closer to 8.5 per cent to nine per cent in the United States. It’s unsurprising, then, that online grocery sales are lower in Canada than in the U.S.

Canadians also express a strong preference for shopping for food in stores.

Globally, 70 per cent of consumers prefer to get their groceries by visiting stores, but that number is 81 per cent for Canadians. There are lots of reasons why shoppers prefer picking up groceries in person, including cost, the ability to choose products on impulse and the issue of scheduling and waiting for delivery.

There are clear differences between the markets in the U.S. and Canada. They help explain why Canadians have been slower to embrace online grocery shopping here.

The Canadian grocery market is dominated by Loblaw, Metro and Sobeys, representing almost two thirds of the retail market. Walmart and Costco are estimated to have almost 10 per cent of the market and are gaining ground. By comparison, the U.S. market is much less concentrated.

Given that Canadian consumers have expressed a strong preference for in-store shopping, the main competitive pressure is coming from bricks-and-mortar big box stores.

Some have argued that the Amazon purchase of Whole Foods was, in part, an acknowledgement that some bricks-and-mortar stores are necessary, particularly for fresh produce categories.

It’s hardly surprising then that retailers have not made expansion to online shopping and home delivery a competitive priority. Why beef up online options when customers aren’t clamouring for it?

Nonetheless, pressure is coming from smaller players and non-traditional grocers. A strong and well-positioned regional brand, Longo’s Brothers, is prioritizing growth through its Grocery Gateway division in the Toronto area.

Longo’s has seen significant growth at the expense of the big chains, but that growth is on a relatively small customer base. Grocers are preparing themselves anyway, in the event that Amazon’s online and home delivery options are a huge success. That threat is driving traditional grocers to increase online offerings.

Executing online sales is difficult, however.

Grocery retailing is a relatively low-margin business, and there are costs associated with online shopping and home delivery, especially the “last mile” — the final leg of the delivery to the customer’s door.

The cost of delivery for the grocer is also highest in the early days, before a big customer base has been built up. That’s resulted in partnerships to facilitate delivery. Walmart, for example, uses Uber and Deliv to allow for same-day delivery for individual customers, so route planning and trucks aren’t needed.

What’s more, consumer wariness and resistance to a number of elements unique to online grocery ordering pose challenges. There are often delivery and membership fees, which raise the cost of shopping. Consumers also have to wait for the order. Not only is delivery delayed, but it needs to be coordinated so someone is there to accept delivery.

Grocery companies are making efforts to address these concerns.

Some retailers are offering pickup at stores or other central depots. Amazon and Walmart have proposed having drivers enter houses to put food in the fridge and avoid the need to have a consumer at home. 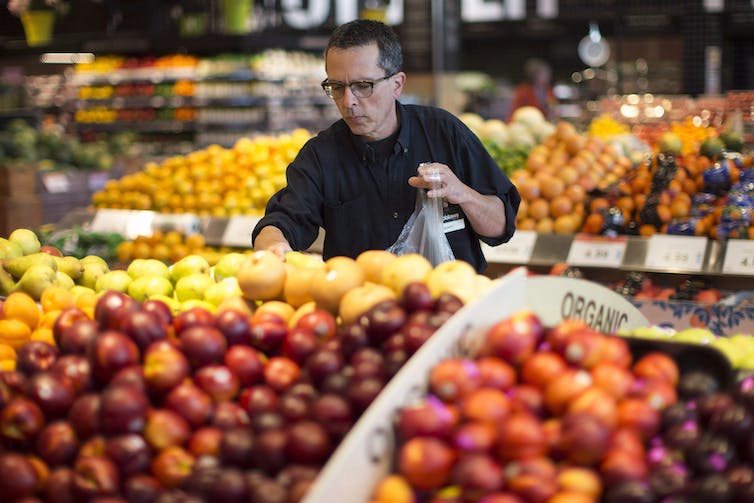 A worker for Loblaw’s Click and Collect service gathers a customer’s order at one of the grocery chain’s outlets in Toronto in June 2016. THE CANADIAN PRESS/Chris Young

After all, there are clearly benefits for grocers who offer online shopping and home delivery.

Order sizes for groceries are likely to be bigger, and more regular, than for books, electronics or other items. Once a customer has tried an online food retailer, they may be less likely to switch. They become familiar with the interface, and an algorithm can make recommendations based on past purchases to speed up the order process, creating customer loyalty.

Increased offerings may also drive demand to some degree, but retailers don’t want to establish unprofitable channels without some assurance that demand exists and will grow.

Right now, the fact that online represents a smaller share of total food expenditures in Canada than elsewhere has more to do with consumer preferences than with an industry lagging in its offerings.