The price fixing scandal might not be all bad for Loblaws

This piece was also published on the conversation.com on April 11th, 2018.

A recent survey from Dalhousie University suggested that consumer trust in Loblaws has fallen by 10 per cent since the announcement of the bread price-fixing issue.

But will the scandal have a sustained negative impact on Loblaws?

While the company may face civil suits at some point, there is no risk of prosecution under the whistle-blower provisions of Canada’s competition regulations. And so the outstanding question is whether the decline in consumer trust results in significant losses in sales and market share to Loblaws.

All retailers painted with same brush

It’s clear that consumers are becoming increasingly distrustful of business generally. They feel in many cases that bad behaviour is the norm, and aren’t surprised when stories like the Loblaws price-fixing emerge.

This is particularly true in this case because Loblaws has claimed (and preliminary findings from the Competition Bureau suggest) that many, but not all, Canadian retailers were involved in the bread scheme.

The Dalhousie study suggested that on average, trust went down for all Canadian retailers following the scandal, although trust in Loblaws declined the most. And so if consumers believe everyone cheats, there’s little motivation to switch stores. Food is a staple. We can’t choose to forego groceries.

It’s worth noting the case of Volkswagen. The emissions scandal that engulfed the German company in 2015 was a significant challenge. Volkswagen paid huge fines and had to retrofit millions of cars. Despite that, the company has seen unit sales growth of 3.8 per cent in 2016 and 4.3 per cent in 2017. 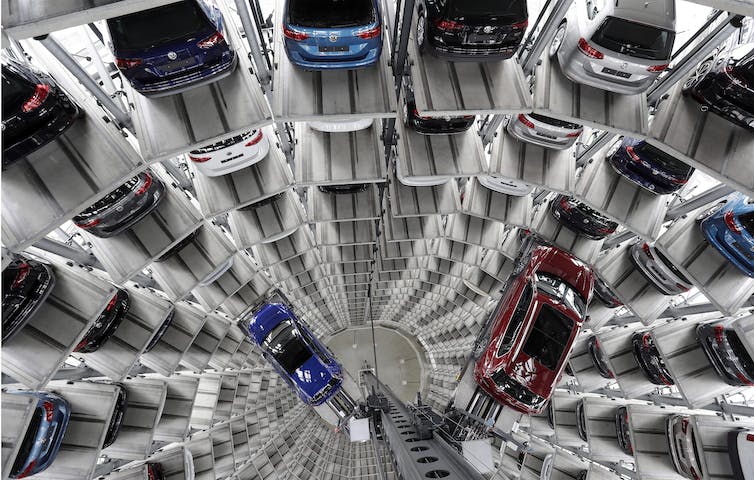 Volkswagen cars are lifted inside a delivery tower of the company in Wolfsburg, Germany in March 2017. The CEO of Volkswagen said the United States remains a core market for the company despite its diesel emissions scandal

There were financial challenges, and Volkswagen performed in some markets better than others, but customers aren’t staying away in droves despite the negative media attention and bad corporate behaviour.

Who is Loblaws anyway?

Another factor that will likely buffer the Loblaws parent company is that many customers likely shop at Loblaws without knowing it.

Loblaws sells food under many different banners including Real Canadian Superstore, Zehrs, Provigo, Fortino’s, No Frills and Shoppers Drug Mart. Many customers likely shop at a favourite store without making an explicit connection to the Loblaws name.

That means even those customers who are inclined to punish Loblaws might not even know they are shopping there.

Loblaws has reportedly distributed as much as $150 million in gift cards (in $25 increments) as part of the campaign to win back public trust in the wake of the price-fixing revelations. These gift cards need to be spent in Loblaws stores. It will bring customers back into the store and they will likely spend more than the $25 they’re entitled to via the gift cards. 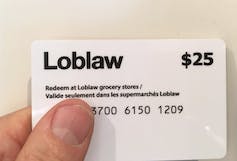 A $25 Loblaws gift card is shown in Oakville, Ont., in March 2018. (THE CANADIAN PRESS/Richard Buchan)

There will also be people who have never shopped at a Loblaws store who applied for gift cards. Rival grocery chain Sobeys has said it expects to feel an impact from the distribution of the gift cards.

Once again, we would expect customers who may have never set foot in a Loblaws store before to spend more than the gift card. It’s even possible that they’ll enjoy shopping at Loblaws so much that they’ll switch stores after spending the card.

That’s not to say Loblaws won’t feel an impact from the price-fixing scandal. They distributed millions of dollars in gift cards. Some of them will not be redeemed — that’s always true of gift cards.

Those that are redeemed will not cost Loblaws the full $150 million as they must be spent in Loblaws stores. That means that, although Loblaws will lose the margin they would have made on the sales, the actual out-of-pocket cost of the card is less than the face value of the card. There also remains the real threat of class-action lawsuits.

In the long run, however, it doesn’t seem likely that Loblaws will suffer significant losses in food market share. The price-fixing announcement came very late in the year, so fourth-quarter results will not provide much insight.

Loblaws’ first-quarter 2018 results will be telling. But the market also seems to believe Loblaws will weather the price-fixing storm. Share price did not decline significantly after the announcement, and a late January drop was attributed to generic drug-pricing reform and the cost of minimum wage increases.

There are still challenges in the market. Stiff competition in the grocery sector still exists and will increase if and when online sales grow. Other factors will continue to keep Loblaws on its toes, but the price-fixing scandal might not be among them.