This was also published on the conversation.com on September 3rd, 2018.

Negotiations for a revised North American Free Trade Agreement have been ongoing for more than a year, but now it’s crunch time — especially for Canada.

What happens in the coming days will determine if NAFTA survives as a three-country trade pact or whether Canada will be left on the sidelines.

Since U.S. President Donald Trump announced the United States had a deal with Mexico that could replace NAFTA, Canadian negotiators have been putting on a brave face publicly. Foreign Affairs Minister Chrystia Freeland was optimisitc when talks took a break before the Labour Day weekend and Prime Minister Justin Trudeau has said “no NAFTA deal is better than a bad NAFTA deal.”

Trump, for his part, took to Twitter to keep up the pressure on Canada.

"There is no political necessity to keep Canada in the new NAFTA deal. If we don’t make a fair deal for the U.S. after decades of abuse, Canada will be out. Congress should not interfere w/ these negotiations or I will simply terminate NAFTA entirely & we will be far better off…"

How will disputes be resolved?

The first sticking point is the existing dispute settlement mechanism — particularly relative to anti-dumping or countervailing duties. This is known as Chapter 19 in the current NAFTA pact.

Currently, each government can review the actions of others and make a determination of whether trade action against a sector is warranted. These determinations can be appealed to the relevant court in each country.

If the dispute is not resolved, it can be appealed to the NAFTA Free Trade Commission and further to a bilateral panel to arbitrate the dispute. The panellists (two from each country and an alternating chair) are appointed by the disputants. The decisions of these panels are binding. It is this last provision that apparently is the sticking point for U.S. negotiators.

It is worth noting this aversion to dispute resolution is not specific to the Trump administration. When the original Canada-U.S. free trade agreement was negotiated 30 years ago, Brian Mulroney’s Conservative government also threatened to walk away without a deal over the issue on how to resolve disputes. In 1988, U.S. negotiators only conceded at the 11th hour.

Leave it to the courts

The United States believes domestic court systems should be able to effectively determine the legality of specific actions and, as such, these panels are an affront to national sovereignty. Canada feels Chapter 19 is an essential element to ensure the fair implementation of freer trade.

Those who believe the panels are not necessary or effective point to the fact that Canada has won several findings in the softwood lumber dispute without actually getting a positive resolution. Past U.S. administrations have also ignored panel findings and forced the Canadians to strike compromise deals or face continued countervailing duties. The U.S. lumber industry remains one of the most vocal opponents of these dispute settlement panels.

But others in all three countries argue the panels are an essential protection despite not being frequently used in the past 10 years. There is little sign of bias because these panel findings are frequently unanimous.

In the end, there will be a mechanism to resolve disputes. Canada will have to decide whether retaining the panels is worth not making a deal. The U.S. will have to decide how far it wants to go on making concessions, balancing its desire for more sovereignty with the political reality of striking a deal that Congress will approve — a critical step in the final implementation of any new agreement. 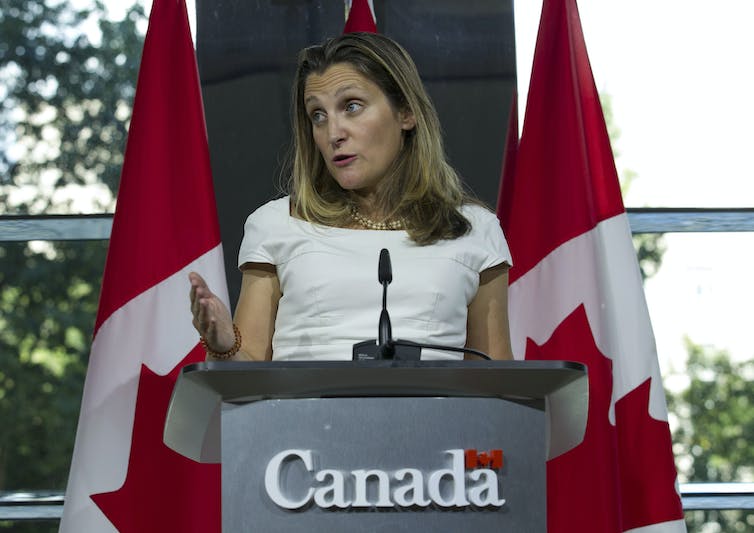 Canada’s Foreign Affairs Minister Chrystia Freeland speaks during a news conference at the Canadian embassy after talks at the Office of the United States Trade Representative in Washington, D.C., on Aug. 31, 2018

While there is some criticism within Canada of supply management — most notably Maxime Bernier’s split from the Conservatives — there is strong support among both the Liberal government and the opposition Conservatives for protecting the dairy industry.

Access to the Canadian dairy market has been somewhat of an irritant in past trade negotiations.

From the beginning, supply-managed commodities were protected by tariffs, but some product has been allowed in (based on historical import shares) using import quotas. Products coming in under these import quotas are not subject to the high tariffs. The U.S. also uses import quotas and high tariffs to protect its dairy and other industries.

As part of other new trade agreements, Canada has provided additional access (through import quotas) to the market.

The Comprehensive Economic and Trade Agreement (CETA) between Canada and the European Union provided for additional access for European dairy products. The Trans Pacific Partnership (TPP) agreement also had provisions for additional market access — including the U.S. market, until the Trump administration withdrew from TPP.

Dairy became a specific irritant early in the Trump administration.

Shifting demand for milk components meant surpluses for milk protein, used to create a product called diafiltered milk. Because it’s a new product, U.S. diafiltered milk is not covered under previous trade agreements. This meant it could come in to Canadian processors, particularly cheese manufacturers, tariff-free.

In retaliation, Canadian milk protein producers first lobbied the government for protection and when none was forthcoming, changed pricing to protect their market. That in turn caused disruption in some U.S. markets — particularly in Wisconsin, an important state for Trump politically.

Even with the decreased volume in diafiltered milk, the U.S. still has an export surplus with Canada in dairy products. Regardless, it appears that this issue is a particular irritant for Trump.

"TrumpPrime Minister Trudeau is being so indignant, bringing up the relationship that the U.S. and Canada had over the many years and all sorts of other things…but he doesn’t bring up the fact that they charge us up to 300% on dairy — hurting our Farmers, killing our Agriculture!"

The U.S. dairy industry, like many others around the world, is struggling with over-production and low prices. The U.S. also has a number of programs in place to support the dairy industry, which would need to be taken into consideration in any NAFTA negotiations around dairy trade.

The irony is the structure of some of the U.S. dairy support programs may actually be contributing to the over-production — surplus products are bought to support prices, which sends a signal to keep producing too much.

Completely open trade with Canada will not solve the issues facing the U.S. dairy industry, not least because the Canadian market is much smaller than the U.S. domestic market.

In the end, Canada is unlikely to yield on supply management. If a concession is made, it is likely to be in increased access. Canada had already provided an increase in access in the TPP negotiations.

This would seem to be an area of potential concession that would provide Trump with a “win” for farmers and allow the Canadians to sustain their domestic program. It would not be without pain for the Canadian industry, but may be the path to an agreement.

The final chapter of these lengthy NAFTA talks will come down to one key point: Is compromise possible?

What are the newest food inflation numbers telling us?