A piece from the Conversation Canada that I co-authored with colleagues Alfons Weersink and Bruce McAdams. Published on January 3rd, 2018.

Food is increasingly in the day-to-day consciousness of Canadians. Consumers are hearing more about food in the media and in the broader conversation.

They’re also seeking more information about their food, including where it comes from and how it’s produced. New issues of interest regularly emerge.

Here are a number of key trends you can expect to be in the forefront for 2018:

Increasing choice and micro-markets for food

As consumers are learning more about food, different attributes are becoming more important for various individuals. Food is becoming less a commodity and more a specialized, individual choice.

Producers and processors are responding to these evolving demands by offering more choices and niche products. There are also increasing choices on where food can be purchased — from smaller-footprint neighbourhood shops to big-box stores.

The challenge becomes balancing the costs of choice and the value that choice brings. Retailers, food services, processors and producers need to determine which products and services to develop and offer, as well as asking the question: “How much choice do consumers really want?”

There are significant supply-chain implications, both positive and negative, arising from providing more variety. Do consumers want more choice of standard food products, or do they want entirely different foodstuffs?

The rise of alternate proteins

On that front, there is increasing interest in alternate sources of protein. Nielsen, the global data measurement company, reports that 43 per cent of Canadians are trying to get more plant-based proteins into their diet.

With only six per cent of Canadians identifying as vegetarian and two per cent as vegan, this 43 per cent represents a significant portion of the population determined to eat less meat. Indeed, we’ve seen a 25 per cent decrease in red meat demand over the past decade.

The phenomenon is driven by increasing concern over the health effects of eating too much meat as well as the environmental impact of meat production. While the science on both issues remains contentious, it’s clear that consumers are eating less meat or, to a smaller degree, not eating meat at all.

That’s meant an increase in demand for plant-based proteins, insect proteins and cultured meats. We’ll continue to see growth in this area as more products become available in both retail and food services.

Antibiotic use in meat production

There’s been a lot of discussion in Canada about animal welfare over the past five years.

The next issue we expect will get substantial attention is antibiotic use in meat production. Its use has animal welfare implications, but there are also a wide range of other potential repercussions that make it a much more complex issue than animal welfare.

The World Health Organization has called for a reduction in antibiotic use in meat production, particularly in healthy animals.

Reducing the use of antibiotics, particularly those used in human medicine, is important. But the complete removal of antibiotics from livestock production could have significant negative implications for animal health and welfare. Going forward, great care needs to be taken to strike the right balance among human health needs, consumer preference and animal health.

The appropriate balance can be undermined by opportunistic marketing with over-simplistic taglines on food products regarding antibiotic use.

Canadians are spending an increasing proportion of their food dollar outside of the home. We spend $80 billion a year in restaurants, and restaurant spending is growing more quickly than grocery store spending.

Food delivery services and meal packages are blurring the lines between restaurants and grocery stores. Visits to restaurants are more frequent, and dining establishments influence food choices as we shop. Their ability to communicate directly with consumers through personal interactions, mass marketing and social media means food service is shaping our thinking about food and the choices we make in grocery stores.

For example, consumers at the grocery store can choose between eggs with attributes ranging from conventional to omega-3 to organic to free range, but the consumer buying an egg sandwich from a fast-food outlet has no choice about the type of egg used — that decision has been made by the restaurant.

However, the restaurant serving chèvre omelets made from “cage-free” eggs and goats free to roam and graze at will can create demand for those eggs and that chèvre at the retail level. 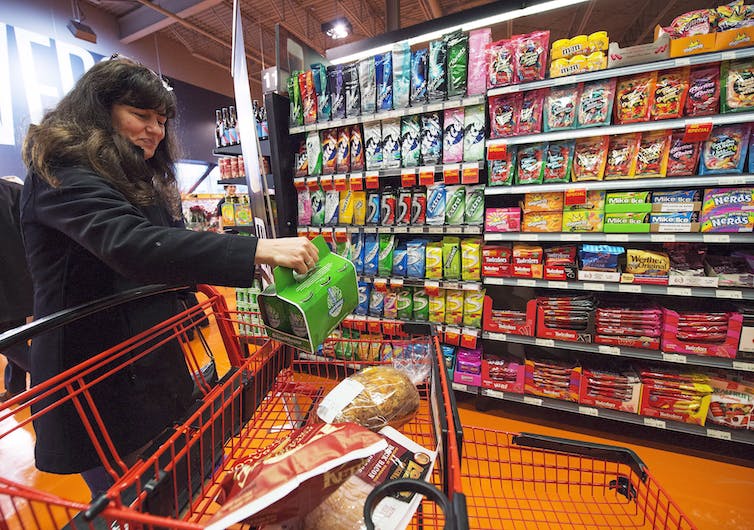 Canadians are increasingly engaged in food, including where it comes from and how it’s grown – a trend expected to grow in 2018. A grocery store customer is seen here in late 2015 at a Loblaws grocery store in Toronto. THE CANADIAN PRESS/Nathan Denette

Substantial minimum wage increases are coming in both Alberta and Ontario. Other provinces, most notably British Columbia, have indicated that they intend to raise theirs in the years to come.

Minimum wage increases have the potential to have a major impact in the food sector.

While many farm activities will be exempt from minimum wage requirements, higher wages in other sectors could make an already difficult labour situation worse on farms. Farms relying heavily on manual labour, such as fruit and vegetable operations, will feel the impacts of higher wage costs, which therefore could result in more mechanization and automation.

We expect an annual increase in food prices overall of two per cent to 2.5 per cent in 2018 (similar to 2017). Price increases for specific products cause consternation, but consumers can often offset rising prices by modifying purchases in the short run. A number of factors can cause unexpected fluctuations in prices, most notably extreme weather events and exchange rate fluctuations.

In the absence of these factors, prices will generally increase at the rate stated above although there is considerable volatility between product and within the year.