This article was originally posted on theConversation.com and was written by

Sylvanus Kwaku Afesorgbor, Brendan McDougall and Jiahao Zhu - all members of the Food, Agricultural and Resource Economics department at the University of Guelph.

The China-Canada relationship has been deteriorating following the arrest of Meng Wanzhou, the Huawei chief financial officer.

She faces possible extradition to the United States on charges of helping Iran evade American sanctions. Apart from detaining two Canadians in retaliation, the diplomatic rift has also had negative consequences for bilateral trade between Canada and China.

There has been a direct adverse effect on Canada’s agri-food sector. First, there was the ban of Chinese imports of canola from Canada. That ban derailed the cordial relationship that existed between the two countries.

But now tensions have escalated with a Chinese ban on all meat from Canada over claims of 188 forged veterinary certificates and the discovery of ractopamine residues in a shipment of pork by a Canadian producer. The Canadian government has called in the RCMP to investigate a falsified export certificate.

Ractopamine is a feed additive used to promote leanness in animals for the purpose of domestic consumption. Although ractopamine is allowed to be used at a specified limit in North America, it’s banned elsewhere, including China, Japan and the European Union.

The current ban may jeopardize the co-operative agreements between the Canadian Food Inspection Agency and China’s General Administration for Quality Supervision, Inspection and Quarantine. That includes the deal signed in 2012 for Canadian beef, beef products, tallow and dairy.

Within the global livestock market, Canada is a major player, especially in the cattle and hogs sector. Canada is well-integrated in the global economy and its livestock industry is highly dependent on foreign market access to sell its excess domestic production.

For cattle and beef products, the share of domestic production exported is about 50 per cent. For hog and pork products, it’s more than 70 per cent, according the Agriculture and Agri-food Canada.

The share of livestock, including live animal, red meat and other animal products, accounted for more than 17 per cent of total agri-food export in 2016. This emphasizes the importance of livestock for the growth of the agricultural sector in Canada.

Canadian beef and pork exporters have become increasingly reliant on China. That’s not surprising — China is a significant player in the world meat market due to its huge population of more than 1.3 billion people. It’s also the world’s second-largest economy, with a GDP of about $13 trillion.

Chinese consumers have provided much-needed demand for Canadian exporters. Exports have helped to maintain Canadian farm income and increase profit margins. So the current Chinese suspension of Canadian meat imports will increase financial risk and uncertainty for the Canadian beef and pork industries.

According to bilateral trade data from Statistics Canada, China has been steadily increasing its imports of pork and Canada has been cashing in. Between 1997 and 2017, Canada increased its world pork exports by 153 per cent. At the same time, Canada increased its Chinese exports from $2.4 million to $560 million. China accounted for more than 22 per cent of all Canadian pork exported in 2019, making it Canada’s third largest importer behind Japan and the United States. 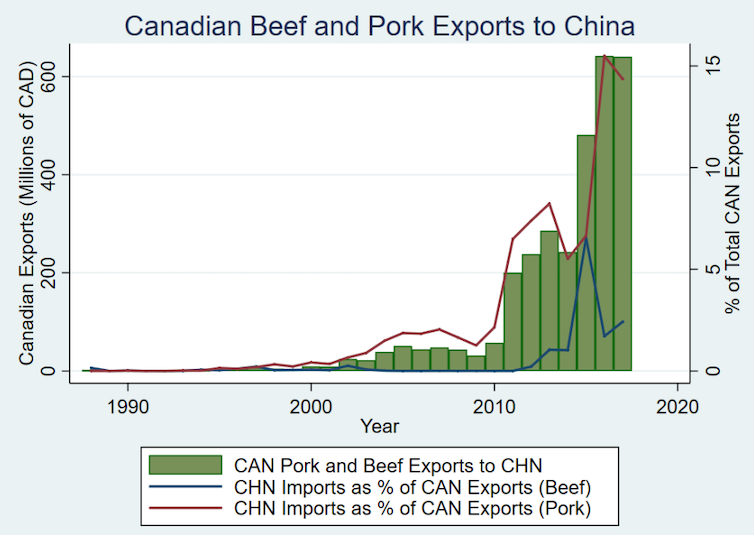 In June 2011, Canada became the first country to regain access to China’s beef market after being affected by bovine spongiform encephalopathy. The agreement to allow entry spurred beef exports. Canada went from exporting $12,465 in beef products in 2010 to $82.9 million in 2017. Beef exports peaked at $255 million in 2015.

Barriers to trade, or denial of market access, could have a significant effect on the marketability of Canadian meat products, and substantial financial ramifications for the Canadian beef and pork sector since it’s so heavily reliant on trade.

Escalating tensions between the two partners threatens to disrupt the growth trend of Canadian meat exports to China. Continuing market disruptions will have significant impacts on the long-term growth and prospects of the Canadian livestock sector.

As a matter of urgency, the Canadian government must quickly work to resolve the frayed diplomatic relationship with China. This is critical since most people believe that the trade restrictions imposed on Canada by China are politically motivated, largely due to the continuous detention of the Huawei executive.

If these trade restrictions are genuinely due to food safety concerns to protect Chinese consumers, the onus lies on Canada to improve its food safety requirements and also block any illegal loopholes in the issuance or acquisition of veterinary certificates for export of meat products.

Canada should also consider banning ractopamine in Canadian meat production to conform to the standards in Europe and other parts of Asia.

But diversifying markets through regional trade agreements like the Comprehensive and Progressive Trans-Pacific Partnership and Comprehensive Economic and Trade Agreement will give Canadian producers access to a diverse set of markets. In the face of Chinese-Canadian diplomatic tensions, Canada should continue to direct its efforts to accessing other emerging and developing countries’ markets.

Thankfully, it’s already doing so. In the wake of China’s canola ban, Canada has successfully diversified its exports to other emerging markets like Paskistan. Export of canola seeds to Pakistan increased by 149 per cent from March to April in 2019, from 65,000 tonnes to 162,000 tonnes, while exports to other markets remains relatively stable.

That type of quick diversification is necessary again for Canada’s beef and pork sector amid the latest diplomatic salvo fired by China.

Trade a Key Component of Climate Resilience for Food System

In a COVID-19 World, is Local Better?