This is a piece that I wrote with my colleague John Cranfield in the Conversation. Published on January 14th, 2018.

Will taxing meat products based on their carbon footprint reduce greenhouse gas (GHG) emissions and improve public health? The answer is maybe, but not notably — and it will come with significant costs.

A recent study in the journal Nature Climate Change advocates applying taxes to the consumption of meat as a means of lowering GHG emissions.

The idea is that if meat is more expensive, consumers will buy less of it. In turn, when faced with reduced consumption, farmers will produce less cattle.

Not all meat production produces the same volume of emissions. Since cows produce a lot of methane (a greenhouse gas), fewer cows should mean less methane, which in turn should help lower GHG emissions. Pigs and chickens don’t spew methane the way cows do, but there are also the emissions associated with feeding them, as well as with the decomposition of manure.

While it’s clear we need to proactively reduce GHG emissions globally, we believe the emissions tax approach is unlikely to achieve success.

It will likely increase food prices for consumers and decrease the prices farmers charge for their products, but it’s unlikely to lower meat consumption significantly and therefore unlikely to lower GHG emissions from the livestock sector. There may be other detrimental impacts to taxation too.

Food consumption is not as strongly linked to price as one might think. Changes in consumption of food are typically much smaller than changes in the price consumers face in the grocery store. This is a phenomenon that has been recognized and measured for decades.

We would need to implement huge taxes to achieve a small decrease in consumption. As an example, the study in the Nature Climate Change journal suggests a 40 per cent tax on beef would only reduce beef consumption by 15 per cent.

We also need to consider substitution effects. While a high tax on beef and other meats will lower beef consumption somewhat, it may also lead to economizing by consumers through increased consumption of lower quality or more highly processed cuts of meat. 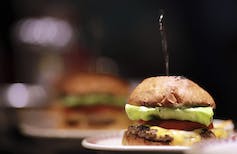 The Trump Burger served at Munch’s Burger Shack restaurant in Tokyo is seen in this November 2017 photo. People lined up for the burger after the restaurant served it to the U.S. president during his visit to Japan. (AP Photo/Eugene Hoshiko)

This could actually increase the relative prices of these cuts, making the negative impact of the tax on lower-income consumers even stronger, and would undermine some of the suggested health benefits.

It’s worth noting that beef consumption is generally falling in Canada and the U.S., independent of price. Other factors are likely to be more effective at reducing beef consumption than taxation.

All cattle are not raised equally

There is a suggestion that any tax on meat should reflect the production system. Those that raise cattle on grasslands or in pastures, for example, would have lower taxes than cattle raised using intensive production systems, like those used throughout North America, which create higher emissions.

While cattle in North America spend their early life on pasture, most beef cattle are finished in feedlots where they are grouped and fed high-energy grain rations to efficiently produce the preferred texture and taste of beef.

A tax based on how cattle are raised, however, would be both politically and logistically difficult.

If grassland and pasture rearing of cattle is favoured because of lower GHG emissions, we could see significant deforestation in those countries that produce beef extensively, but not a substantial reduction in consumption as desired.

We could end up in a situation where many differences in production practices, even within countries, create different emissions estimates and therefore cattle producers would seek different tax levels.

There’s also a risk that a meat tax would reduce the incentive to initiate research and development that could help cut emissions within the sector.

Examples of such R&D include efforts to improve the feed efficiency in cattle production. At the farm level, feeding more cattle on a forage-heavy pasture diet could increase the costs of producing cattle and change the characteristics of the beef while eroding the incentive to adopt climate-friendlier production practices.

It’s worth noting that the United Nations Food and Agriculture Organization has said that emissions could be reduced by 30 per cent today if current best practices were broadly implemented. This is beyond the impact of a 40 per cent tax. The incentive to adopt these best practices would be removed by the implementation of a tax.

Progress can be made

As experts in food and agriculture economics, we agree that reduced GHG emissions are important for the future of humanity. We also believe that we are likely to substitute plant or insect proteins or cultured meats for traditional meat products over time.

Even if it were possible to get broad-based agreement for a global (or even just a Canadian) tax on meat, however, it is important to look not only at whether these efforts would reduce GHGs, but also at the unintended consequences of these efforts.

In the case of the proposed meat tax, it is not only unlikely to achieve the intended outcome, it is equally likely to create a spate of unintended consequences that would negatively affect not just cattle producers, but also consumers.